Ottessa Moshfegh's DEATH IN HER HANDS: A Review 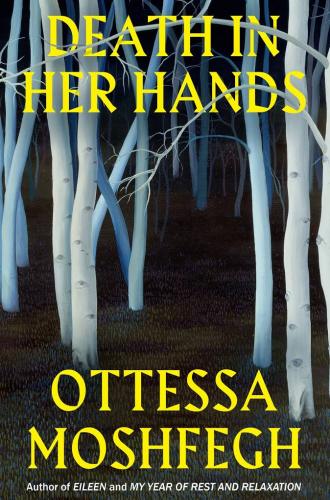 Ottessa Moshfegh’s Death In Her Hands is a wry, toying tailspin of a book. It begins with the finding of a note: “Her name was Magda. Nobody will ever know who killed her. It wasn’t me. Here is her dead body.” Its discovery sends the newest of Moshfegh’s eccentric narrators into a psychosomatic spiral of homespun sleuthing and self-realization. What results is an insidious meta-mystery that launches the protagonist on a twisted quest for justice, identity and erratic female independence.

The novel tells the story of Vesta Gul, a seventy-two-year old widow who, after her late husband’s death, has picked up and moved to the rustic town of Levant with her dog Charlie. “I felt I needed to hide a little,” she explains. “My mind needed a smaller world to roam.” Her new home is a cabin on an old, abandoned Girl Scout camp. She has little company there besides her dog, her late husband Walter’s ashes and an evangelical public radio personality named Pastor Jimmy, whose show Vesta listens to every night. She hikes with Charlie each morning, reads, cooks and drinks wine—just generally “finding things to do to pass the time.” That is, until she comes across the mysterious note in her birch woods (“Her name was Magda…”). Just the note on the ground—no body or murder weapon or lingering clues. Nonetheless, Vesta is quick to assign herself the role of amateur detective, excited to have her mellow routine ruffled by the note’s unsolved mystery.

The detective narrative Moshfegh initially sets up plays freely with the hand-me-downs of genre conventions. Vesta herself has “seen plenty of murder mystery TV shows,” and as such her investigation begins traditionally enough. She brainstorms a list of suspects. She goes to the library and searches: “How does one solve a murder mystery?” She easily (and eagerly) conjures up graphic descriptions of Magda’s missing body, wondering, “was it so hard to come up with a description of her corpse, tangled in the brush under a fallen tree…her hands hog-tied behind her back, the blood from her stab wounds leaching into the ground.” Vesta, like any avid reader, is familiar with society’s favorite murder mystery tropes. Moshfegh has her fun with these from the get-go, setting our expectations up for an eventual slashing. She lines up parts of Vesta’s little world like game pieces on a chess board. Her lakeside cabin in the woods. Her mysterious neighbors across the water. A foreboding island in the middle of the lake, just a rowboat’s trip away…

Vesta herself is positioned as a potential Miss Marple or Jessica Fletcher type heroine—a mellow old widow turned amateur detective, whiling away the back half of life solving local mysteries. Moshfegh lets her protagonist play to formula and fantasy, but she never lets things get too precious. Vesta’s trite conclusions ultimately reveal a lurking darkness to her character. At the very start of her investigation, Vesta casts Magda as the young, female victim—the mystery genre’s very own fetishistic version of the manic pixie dream girl. But Vesta soon becomes obsessed with acting the author and crafting Magda’s character—continuously morphing her looks, personality and backstory throughout her investigation. Her identity is entirely at the whim of Vesta’s oscillating mental state. One moment she’s a daughter-like figure, one the childless Vesta imagines nurturing. The next she’s a reflection of Vesta herself—a youthful, might-have-been incarnation that Vesta mourns the near-existence of. “It is easy…to find great affection for victims, emblems of vanished potential,” Vesta muses, thinking back on her marriage to Walter and its lopsided power dynamic. “There is nothing more heartbreaking than a squandered opportunity, a missed chance.” She sees her young self in Magda—the vulnerable victim in a man’s quest for control. After all, Magda’s murderer could only have been a man. “It seemed unlikely that a woman would abandon a dead body in the woods,” Vesta decides early on, “so I felt I could safely presume that the writer of the note, this me, this character, the I of the story, must be male.”

As Vesta’s role in the mystery turns more personal, Death in Her Hands in turn becomes increasingly meta. Vesta gets swept up in the romanticism of the crime and its telling, referring to the ominous message as an “invitation, or poem” and to herself as a “mystery writer.” She deems the story “a cozy little whodunit.” She remarks on the mystery’s pacing when researching at the library (“Let us hope [the killer’s] not presently strangling the lady librarian. If he was, the mystery would be solved too easily”) and invents a cast of supporting players to construct a more enticing narrative. “I still needed a strong male lead,” she declares as she brainstorms her suspect list. “Someone in his mid to late forties, a Harrison Ford type.” She fills out her cast and plot as only an author would, editing her narrative to bring her chosen reality to fruition.

Vesta’s god-like manipulation of Magda’s mystery allows Moshfegh to ironically remark on the authorial act of crafting a novel. Death in Her Hands is preoccupied with omniscient authority. God is always lurking, speaking to Vesta through a number of proxies—Pastor Jimmy, her late husband Walter, and the novel’s immense natural setting. Moshfegh—playing God—sets up the novel’s elements, but lets her protagonist manipulate them so that the reader can see the seams of Vesta’s makeshift narrative, the flaws in her reasoning. It would be easy to sum up Vesta’s investigation as the boredom or hysteria of an old woman, but just as we’re tempted to draw such conclusions, Moshfegh tips the novel’s tone from darkly comedic to downright disturbing. Vesta’s abandoned Girl Scout camp transforms into a scene of decaying girlhood—the perfect backdrop for the once demure and dutiful Vesta to succumb to the escalating madness of her mystery. Her actions, even simple ones like eating or dressing herself, turn primitive. The scattering of her husband’s ashes—an act Moshfegh heavily foreshadows—is handled bluntly, without ceremony. Just a sudden trip out in the rowboat at night. Not a laying to rest, but a dumping. The entire urn goes into the lake, its plunk into the depths not unlike the disposal of a body.

Such acts make up Vesta’s desperate attempts to reclaim her own mind. Early in the novel, Moshfegh introduces the concept of “mindspace” or the sharing of a mind with another, which Vesta says she did with her late husband Walter. “Walter and I had shared a mind, of course. Couples get that way. I think it has something to do with sharing a bed.” The reader shares a “mindspace” with Vesta; Moshfegh offers us no relief with any outside logic. Her perception proves claustrophobic, both for the reader and for Vesta herself. Vesta is badgered by a chorus of imagined critics—the late, domineering Walter, the Levant townsfolk and even, on occasion, her dog Charlie. Her “mindspace” is a crowded one, turning her search for Magda’s killer into a crisis of self, a quest for her own independence. Yet the voices in Vesta’s head call into question her reliability—are they a yearning for companionship, a sounding board? Or are they proof of an old woman’s mental demise?

Moshfegh never lets the reader get too comfortable in our assessment of Vesta, preferring to let us fester in her protagonist’s precarious mental state. The author has always enjoyed plunking her readers into the mindsets of oddball characters—people you’d never think to share a “mindspace” with. Take her past protagonists—the alcoholic McGlue, the prudish, sardonic Eileen, the sedated heiress from My Year of Rest and Relaxation who’s determined to sleep for a whole calendar year. Moshfegh’s true talent comes from her ability to craft characters who swallow up the reader in their bizarre plights. We become one with their oddity, subject to their stream of conscious narration, until we eventually uncover the blunt humanity Moshfegh’s hidden beneath their peculiar facades. We begin Death in Her Hands summing Vesta up as so many others do: a mentally stale old woman stuck in her routine. We aren’t inclined to take her seriously. She is entertainment, for we are the reader and Vesta our protagonist. But as reality and fantasy begin to blur in Vesta’s world, so do our respective roles. We become one with Vesta in her “mindspace.” We piece together unsavory memories with her, make conclusions with her, feel the walls of reality close in on her (our?) fantasy. As such, Vesta becomes less and less of a foregone conclusion. She sheds her tropes like skins, exposing something darker, messier. Her memories of Walter lose their initial rose-colored tint, Magda’s death its romanticism and Moshfegh’s tone its irony. What we’re left with is the portrait of a woman forced to face the ugly truth she’s disguised from herself.

“[It’s] good to have a few secrets here and there,” Vesta muses early on in Death in Her Hands. “It [keeps] one interested in herself.” Keeping interest is not something Moshfegh needs to worry about. Her precarious balancing act between fantasy and reality gives the novel’s protagonist and her mystery—no matter how cozy or claustrophobic it becomes—staying power until its conclusion. We are happy to remain here inside Vesta’s “mindspace,” grappling for clues to assure us that Vesta’s lucid, Vesta’s right—because if not, we will go mad, trapped in the mind of this protagonist.

But maybe it isn’t madness at all—at least, not in the classic sense. The quest for identity is a mad one. The struggle for self-realization can drive anyone to extremes. In Vesta’s case, it transforms her into a force—whether sound or not is up to the reader to decide. Death in Her Hands isn’t a “cozy little whodunit.” It’s a character study, a twisted tale of empowerment. Vesta’s liberation might be warped, but by the end of her mystery, she’s definitely not the victim.

Brenna McPeek is a writer based in New York City. She holds an MFA in Fiction from Columbia University and her work has appeared in Drizzle Review and Thoughtful Dog.