Is secretive, nocturnal, and solitary.  So, am I.
Undomesticated. I don’t cook either.
I was a predator, too, of the warm and fuzzy,
The prairie dogs of the world, the little beloveds
Of the grassland colonies. The fat ones,
The juiciest.  Back when there were colonies.
Black-footed ferrets, like me, are
Endangered, but not critically.
It’s true, black-footed ferrets suffer
From a loss of habitat.  It is fairly difficult
For them to live in just a cornfield,
Or a hayfield, or a beanfield
That runs all the way to either horizon.
These last couple years,
I found that became difficult.
Even the prairie dogs of the world
Found that to be difficult
These last days, as the plague
Swept through, and decimated them.
The old plague, the Black Death,
Or the newest plague, brings us all
To the same end:  No food for the hunted,
No food for the hunter.
Naturally, without having to wear one,
A black-footed ferret is masked.  So, am I
In a place without a mask order. Ever.
v
The average life-span of a black-footed ferret
Is a couple of years in the wild,
And twice that in captivity.
All this leaves me secretive, nocturnal,
And solitary. And hungry, hungry, hungry!
Maybe the black-footed, black-masked
Black-hearted ferret wants me,
Wants us all, to just get out there, and eat.
Maybe that is not the best possible
Advice to take, you know, from an endangered
And dangerous animal.  Even I caution myself:
Maybe that is just not going to be possible. 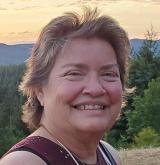 Mary Jane White is a retired trial lawyer who also holds a MFA Iowa Writers’ Workshop, and has been awarded two NEA Fellowships, one in poetry and one in translation. Her Tsvetaeva translations appear along with early original poems in Starry Sky to Starry Sky (Holy Cow! Press 1988) New Year’s, an elegy for Rilke (Adastra Press 2007); Poets Translate Poets, (Syracuse 2013). After Russia: Poems of an Emigrant: After Russia, Poem of the Hill, Poem of the End and New Year’s (a bilingual text) is forthcoming later in 2021 from Adelaide Books (NYC/Lisbon), and a new book of original poems Dragonfly.  Toad.  Moon. is forthcoming in April 2022 from Press 53 (Winston-Salem, N.C.) Contact her at maryjanewhite@gmail.com.