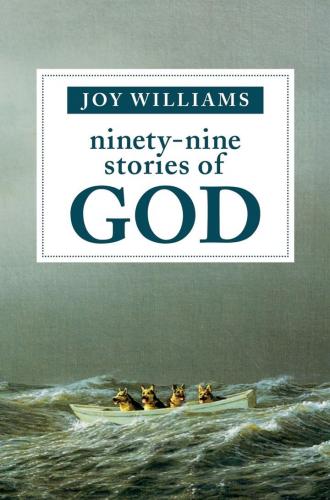 Joy Williams’s collection of flash fiction Ninety-nine Stories of God (Tin House Books, July 2016) begins with what might be called a ghost story.  In the first sentence of “Postcard,” the narrator speaks with Williams’s trademark craftsmanship: “A woman who adored her mother, and had mourned her death for years now, came across some postcards in a store that sold antiques and various other bric-a-brac.” I highlight this sentence because I hope it grips you as it did me when I first encountered it, but also because it nicely represents the concision and density of the rest of the book’s sentences. The story is revealed, the mood shifts, clause by careful clause. Further, these moods are understated. For all its sentence-level simplicity, Ninety-nine Stories is a book filled with subtleties and nuance, layered moods and complex ideas.

Reading Ninety-nine Stories can be a disjointed, disorienting experience. It’s accessible, subdivided into bite-sized, fast stories that serve to chill or humor or unsettle. But these segments, extreme in their brevity and hyper-precise in their language, are often deliberately contradictory, confusing the book’s own ideas and the reader’s understanding. “This Is Not a Maze” reads the title of story 18, below a cross-sectional diagram of a folded tarpaulin that resembles nothing so much as a maze.

And no element of the book is more complexly depicted than the titular God. The reader might find that, having finished the book, she’s left with many of the same questions prompted by the title. Is Ninety-nine Stories, at its heart, sincerely religious? Is it, to the contrary, intended as a criticism of religion? Who or what is the God found in the text? The sporadically appearing God of these stories is prone to the same confusion, limitations of knowledge, vanity, anxiety, and inattention that we all are. One of my favorite moments occurs in the 93rd story, “Father and Sons." When a group of wolves, with whom God is talking, thank him for inviting them to participate in his plan, God “did not want to appear addled, but what was the plan His sons were referring to exactly?”

Ninety-nine Stories contains a tremendous amount of diversity, in both content and character. We receive stories about Kafka, stories of unsettling relationships between pets and their owners, stories of monks and mystics, photographers, humanists, naturalists. There is a certain associative logic to the organization of the pieces: an idea or link might appear for a few consecutive sections before making way for a new topic. For example, “See That You Remember,” a paragraph-long boast from God about giving Tolstoy a dream he would later write about, is followed by “Not His Best,” in which God denies ownership of Kafka’s more upsetting dreams. The story immediately following these is a kind of joke parable about two monks and a garden. A wealth of themes surface and dissipate this way, many of them dark: cruelty to animals, inexplicable acts of violence, madness, the death of children—often at the hands of their parents. And though they don’t all feature the character of God, they are still ostensibly of God; Williams complicates the intent of the book and the picture of God that she’s presenting.

“If Picked or Uprooted These Beautiful Flowers Will Disappear” begins with two women discussing a child’s drowning and ends with one woman impulsively murdering the other. The last sentence, as though to condemn the fact that no one will be held accountable for the child’s death, reads, “There were two funerals but one trial.” Just as frequent as troubled parent-child relationships (in “Moms,” two women discuss throwing an Anti-Mother’s Day party) is the theme of animal cruelty. Kafka’s vegetarianism is the topic of one story. Children visit a slaughterhouse, but are not permitted inside, in another. A gardener is haunted by his days hunting big game. Animals are often presented as noble, even heroic, or as victims of humans’ needless violence. If Ninety-nine Stories is ambiguous, here’s a thesis with little room for reader interpretation: animals have long suffered brutality at the hands of humans. And all these, too, are stories of God. Arbitrary tragedy permeates the universe and must be accounted for, but usually occurs with seemingly no one (visible) to blame.

The forms, too, that these pieces take are myriad: rumors, news items, biographical factoids, jokes, parables, meditations, tales of the supernatural. So various are their shapes that they become a kind of commentary on fiction and storytelling (and, more broadly, art) itself—its history, its methods. Anecdotes about artists, intellectuals, mystics, criminals, and (most frequently) writers compete with God for space in the book. Usually these anecdotes concern these figures’ relationship with God: the messages they thought they received, the visions they experienced, the madness that others later believed afflicted them. The lines between art, worship, and mental illness are repeatedly blurred. “Franz Kafka once called his writing a form of prayer” begins “Not His Best,” a story that proceeds to relate how Kafka also “frequently fretted that … what he bore on his body was not a human head.” Writers and thinkers are as much tortured by God as they are inspired by Him.

In “) (” we learn of Jakob Böhme, a German mystic who devoted years trying to articulate a divine revelation, in which he believed God revealed Himself in a ray of light reflected off a plate. This comes late in the book, the idea of the inexpressibility of God. In another story, “Essential Enough,” God struggles with phrasing who or what He is. “It sounded ridiculous,” notes the narrator, “He didn’t favor definitions.” In what might be the most earnestly contemplative moment of the book, “Naked Mind,” the narrator notes, “One should not define God in human language,” that we “can never speak about God rationally as we speak about ordinary things, but that does not mean we should give up thinking about God,” and finally that we must descend “ever deeper into the darkness of unknowing.” If there is any way to begin unwinding the tangled knot of these stories, it is here. The confusion, the inconsistencies—these appear to be crucial elements in any attempt to tell a story of God. Lacking a clear vocabulary to speak of the divine or the mystical, the stories themselves become the language needed to understand the non-understandable. In this way, the book as a whole almost functions as a long kōan.

I will grant that not every story is a thrilling read. The book has its flatter moments, but this is probably a matter of taste. If you are inclined to flash fiction in general, you may enjoy the one-sentence-long “Museum” (“We were not interested the way we thought we would be interested.”) more than I did. Regardless, the writing throughout the remaining 90% of the book more than makes up for these exceptions. It’s hard to believe Williams when she states her disdain for talking about craft, because one of the first things that flies off the page is the masterful craftsmanship of these painstakingly concise pieces.

Which is not to say that marks of artifice give Ninety-nine Stories of God an inorganic feel. Quite the contrary—there is a deep sense of reality residing in this book, owed in great part to the sheer, fractured breadth of its 99 segments. Whether to interpret that reality as God will be left as an exercise for the reader.

Sam Wallace has an MFA in Fiction from Columbia University. He currently lives and writes in Alexandria, Virginia.