Without warning my mother tells me, “I was orphaned at your age.” I look into her marble eyes, and they seem to be asking me if I understand: the pain. Do you feel the pain? Of course I do. I feel all the pain. I unlock my eyes from hers and look down at the table, in between us are stained, empty plates. Only moments ago, the plates were filled with food that we’d cooked in the small kitchen together, the apartment filling with the smell of salted salmon, fresh white rice, vegetable and tofu soup. They are all gone now—things are so fleeting.

“She died when I was 29. Your age,” my mother continues. “Can you imagine losing me right now?” A tiny bomb sets off in my ribcage. Just a few nights ago, I had a dream that my mother was a stranger. She did not die, but it felt worse. The woman looked familiar, but I did not recognize her as my mother. I woke up terrified, the feeling of not having a mother lingering in my body for a moment before my consciousness reminded me that I had a mother still. Her marble eyes are still looking at me, into me, so I mutter a broken “no.” I cannot imagine her dying now. Or ever. “She died when I needed her the most,” she says. I do not know what to answer.

There is so much space in my brain for memories with my grandmother. My brain contains none. My grandmother knew me for a little while—just for a few months before the cancer got to her brain. She held me, she fed me, she changed me, she sang to me, she bathed me, she rocked me. But I don’t remember.

Lately, when people ask me what I am writing, I answer, “about my dead family.” I tell them, “It’s a way for me to bring them back to life. Or at least to remember them. I don’t have them anymore, so I need to write about them so they’re not gone.” It is an act of desperation. I have more family members who are dead than alive. I don’t know how to cope with that. I miss them—even the ones I never knew. Even the ones I never met.

My mother and I move over to the kitchen to clean up and prepare our lunches for tomorrow. We both go into work a few times a week: my mother to her office job in midtown at her Japanese bank job; me to two different college campuses for adjunct teaching jobs. It’s strange to be preparing lunch again, after a year of just eating lunches at home. Before COVID, we’d make semi-elaborate bentos out of leftover dinner, but the rhythm is gone now and usually, we scrummage through the fridge for something edible to bring, or when we remember to, we make onigiri.

I fill up the glass bowl with scoops of still-hot rice from the rice cooker and add in the onigiri mix. While I mix with a rice paddle, my mother washes the dishes. She glances over at me to say something. She is always saying something to me.

“I used to hate the onigiri my mother made for me when I was young,” she says, the warm water running over her hands in the sink.

“All of the other girls’ moms would make these really small, neat triangular onigiri and pack the seaweed separately, but my mother would make these giant balls pre-wrapped with seaweed. They looked like black baseballs.”

I can’t help but laugh. I can picture my mother in middle school sighing as the two big balls of rice covered in black stared back at her. I can see the girls sitting around her smiling politely but also widening their eyes a little at the intenseness of my grandmother’s onigiri.

“I would give anything to have one of those now, though,” she says. I stop mixing and look at her. I look at her hands. My grandmother was younger than my mother is now when she died. Her hands were younger than my mother’s. I imagine my grandmother’s young hands cupping and shaping rice into balls for her children. I imagine that her movements were fast, just like my mother’s.

“And you know why she wrapped every square inch with seaweed?” “Why?” I ask her, curious. “Her brother was a seaweed maker. Actually, our entire family was seaweed makers. It was in her blood. She loved seaweed, and she wanted to make sure we could taste the sun in every bite.” “The sun?” “How do you think they dried seaweed?”

I nod in silence and continue to mix the rice. I do not cup them in my hands like my grandmother had done because I have an onigiri mold, and using a mold saves time and effort. I scoop some rice into the mold and press it with the top piece until it becomes a nice triangle and I pop it out of the mold. I make four onigiris in total—two for each of us. I then open the freezer to take out two sheets of seaweed. I roast them directly on the flame of the stove to get rid of the freezer taste. This is my favorite part: I like watching the sheets stiffen and take on a bluish hue. The smell reminds me of home, of my aunt’s house in Japan made of ancient wood. It was built by my great-grandparents, and my grandmother had moved into it as a young woman to marry my grandfather, despite the neighborhood gossip that my grandfather’s mother was the meanest woman around. My grandmother didn’t care—she was in love and full of hope.

Much of my childhood was spent in this home, despite it not being my own. It had been passed onto my aunt, who married and had two children—my two older cousins. We’d have dinner there two, maybe even three times a week: my aunt, my uncle, my cousins, my mother, my sister, me at the table. The smell of old wood and tatami was constant and everywhere, and it would mix with the delicious aroma of my aunt’s cooking. On special occasions like New Year’s or a birthday, we would have hand-rolled sushi. A big, wooden bowl of rice mixed with vinegar as the centerpiece; two plates of sashimi on each side with tuna, salmon, salmon roe, octopus, squid, shrimp, mackerel. Sticks of cucumber on smaller plates; a bottle of soy sauce and a small tube of wasabi, which I hated back then. And of course, the seaweed cut into neat squares and stacked on top of one another like paper. Before everything was ready, before everyone was seated at the table, my aunt pulled out sheets and sheets of seaweed and roasted them on the open flame while the children played in another room. The smell found us, causing us to pause briefly to revel in the excitement of a special dinner. Life was simple like that. My sister and me in our cousins’ small bedroom playing next to their bunkbed. In the other room, a Buddhist shrine and framed photos of our grandparents and great grandparents—everyone who had lived in this house before us watching over us.

When the seaweeds are roasted, I slowly rip them in half and wrap the onigiri. I make sure that all the rice is covered. My mother is distracted by the washing and doesn’t notice what I am doing.

“Look,” I tell her when I am finished, just as I used to when I was a little girl showing her something I’d drawn with a crayon.

“Hm?” she looks up, smiling widely. Whenever she looks up at me like this, she glows like the orange sun melting into the horizon.

“Fumie-nigiri,” I tell her. Fumie was my grandmother’s name.

My mother pauses. She looks at the seaweed-covered rice balls. For a moment she looks to be on the verge of tears. But the moment is gone, and she smiles again. “Wow, you don’t know how happy your grandmother would’ve been to have an onigiri named after her.”

It’s true, I don’t know how happy she would’ve been. But the thought of being able to make my grandmother smile the way my mother smiles is enough.

This is how I will keep her alive. 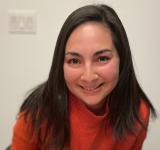 Rebecca Suzuki’s work has appeared at The Bookends Review, Blue Earth Review, and Communion arts journal. She is a recent graduate of the CUNY Queens College MFA in creative writing and literary translation and teaches English and Writing Composition at Queens College and at Montclair State University.