I heard some girls say that God was absent from our town. All the girls at the all-girls Catholic school had experienced something that fell under the nuance of rape. If a girl at the all-girls Catholic school experienced rape, they were to fill out paperwork in the counseling office and file it in the main office. When Abigail had sexual violence done to her by Jude Thomas from the all-boys Catholic school, she filled out paperwork in the counseling office and filed it in the main office. Now what? asked Abigail. That’s about it we said. So Abigail started drugging Jude Thomas. She crushed up her birth control pills and mixed them into his protein powder before water polo. All semester Jude Thomas took birth control. Jude Thomas grew irritable and sensitive and sprouted breast buds and listened to Lana Del Rey. Now he understands what it’s like, said Abigail, to be a girl. Abigail was sent away to a Swiss boarding school. Jude Thomas got a full ride to Penn State for water polo. This all happened in the absence of God.

I snuck a Croatian boy home with me. My dad caught us undressing in the pool house and chased the boy down the driveway with a hunting rifle. Fucking Croom kid he called after him. My dad couldn’t run further. If you touch her again I’ll put a hole in your head. He hurt his knee in the navy. The knee had a plate in it that set off the metal detectors at airports.

San Pedro was the largest diaspora of Croatian immigrants in the country. Colloquially, that four miles of shoreline was called Little Dalmatia. We had pejorative terms for them; Crooms--referring to when Croatia was part of greater Yugoslavia. But the slurs only betrayed a deep understanding of Slavic culture. The Croatians worked in the harbor and lived in row homes and used tap water tainted by runoff from the oil refinery. The Longshoremen’s wives packed them seafood pastas they’d eat between loading and unloading the cargo ships.

I lived a mile up the hill in Palos Verdes overlooking the harbor. Verdes is Spanish -- the language the gardeners spoke -- for green -- the color they kept the lawns. All of the smog that settled over Little Dalmatia dissipated up the hill. We had a golf course and a tennis court and an equestrian center and a Catholic church and a Lutheran church and a Protestant church and an Episcopalian church and an Equinox. Our tap water was filtered.

I snuck out of my bedroom window and walked a mile down the hill to meet the Croatian boy. I apologized on behalf of my dad, and he shrugged like these things happen and rolled me a cigarette. His hands had grease on them from fixing his bike chain. We snuck into a shipping crate in the harbor, and I coaxed his hand under my uniform skirt. He asked me why, if I had so much money, did I look like a starving orphan? Outside we watched smoke plumes ripple off the oil refinery as giant machines distilled asphalt and petroleum.

Teach me some Croatian I said.

A tenth-grade girl went missing after school. She never showed up to softball practice. The team waited and waited. She never showed up to cello or Shakespeare Club or Youth Government. The neighborhood held a vigil. There were stories that she’d been kidnapped by the Croatians and was being held for ransom. We waited for her finger to show up in her parent’s mailbox. Still wearing her mood ring; milky pink and indigo swirls. Pink = scared. Indigo = hungry. All of our mood rings were indigo. We were all chinese-gymnast-skinny. It turned out that the tenth-grade girl had run away with her dad’s business partner. Her parents didn’t get her finger in their mailbox. They got a postcard from Crete. Her fingers were all left intact, in fact, they had a French manicure.

A snooping Sunday School girl found Ben Scharlack’s confession and posted it on Instagram. This is what it said:

Forgive me father for I have sinned. That’s how you kick these things off, right? I cheated on the AP stats final. I stole a pack of gum from the Minimart. But what I most want to confess, Reverend, is that your son gives me head every Wednesday morning in the church parking lot. I’m pretty hard on him in school and for that I am sorry because every Wednesday morning while he’s sucking me off and looking up at me with those big blue eyes, I think about how much he means to me.

After my mom left, my dad bagged up her clothes and donated them to the Catholic church. He started dating the down-syndrome girl’s mom. He paid for her to have her breasts done. I invited the down-syndrome girl to a sleepover but she declined. She said she didn’t want to be my sister. She ignored me at Mass while our parents held hands in the pew.

A Columbian exchange student transferred to our school. We invited her to a sleepover. At the sleepover the girls told secrets and we asked the Columbian girl to tell us a secret and she did. She told us that once she hit a hitchhiker while she was driving on a dark road in Columbia. It all happened so fast that she just kept driving and never told a soul until she came to America to attend our high school and told us at the sleepover. That was the best secret we’d heard in a while. We told her she’d be fine here because, for the most part, God was absent from our town. When the girls went to sleep, I snuck back out to meet the Croatian boy whose hands were perennially slick with bike grease. I laid in his arms and told him about Abigail and Jude Thomas and the Columbian exchange student who’d committed vehicular manslaughter and the missing tenth grader who wasn’t missing at all. Loša mala bogatašica, he whispered.

I walked home early Wednesday morning through the church parking lot. Ben Sharlack was leaning against the wall with his hands in his pockets and looking into the distance.

What are you waiting for? I asked.

I ironed my skirt while my dad read the paper. I dabbed at the grease stains, and he glanced up and said what’s that from? I said I must have sat in something at the horse stables and for a moment he knew. He knew I hadn’t sat in anything at the horse stables. I could almost see him limp the mile down the hill to the harbor. I could see myself chasing after him in my bike shorts crying daddy no! until he found the Croatian boy and I could see my dad shooting him in the head with the hunting rifle in Little Dalmatia while the longshoremen ate their pasta and the oil refinery distilled petroleum. But instead he just said be more careful. Those skirts are expensive. 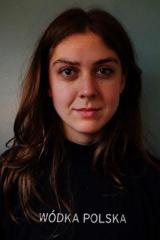 Madeline Cash is the editor of Forever Literary Magazine.