The last mirror was put on trial. The last mirror was accused
of inciting vanity, of lacking originality, of encouraging vice,
of being nothing more than a parrot or an echo.
The last mirror’s defense was that Echo had shown devotion
to the man she loved, and that parrots love their pirates.
The last mirror insisted that vanity, like greed, can be good,
because really, every man should love himself. The last mirror
argued that vice is a lot of fun every now and then,
and that imitation can also be a form of love,
why even Freud, that old master, could not distinguish between
the desire to possess and the desire to be. The last mirror
lost the case. As you may have guessed, it was a show trial.
The judge said that love is not a defense, and even ejected
the viewer who laughed when the prosecutor
asked the mirror in a froth of rage and anger
“What’s love got to do with it?” entirely unaware of the song
by the same name. The judge ordered the last mirror
shattered into a hundred thousand pieces on the courtroom floor.
When the bailiff had shattered the last mirror,
each one of the pieces proclaimed that now
it was the last mirror, however small the piece might have been.
The judge held the prisoners
in contempt
and called every piece a liar.
from Hold Me Tight (Red Hen 2020; first published in Plume Magazine) 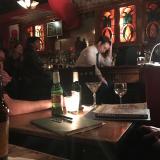 Jason Schneiderman is the author of Hold Me Tight (Red Hen 2020); Primary Source (Red Hen 2016); Striking Surface (Ashland Poetry Press 2010); and Sublimation Point (Four Way 2004); as well as the editor of Queer: A Reader for Writers (Oxford UP 2016). He is an Associate Professor of English at the Borough of Manhattan Community College, CUNY.