A Ghost in the Throat by Doireann Ni Ghriofa

The notion of the female text is one that some — such as my mid-20s self — may find slightly embarrassing, somewhat self-indulgent, maybe also a little bit gross. In its resistance to patriarchal norms, the female text gathers up and embraces notions of female otherness (some might say, of an essentializing, TERF-y kind), those tainted with a whiff of inferiority, claiming a messiness and irrationality and animal physicality for womanhood that some find, well, rather off-putting. Does celebrating womanhood really require writing in fragments, having intense emotions, writing about breast milk? Can’t we be cool, successful modern women, with effortless bodies, who do not coo over children?

Of course, that notion of “coolness” is itself a patriarchal norm, a specifically male version of success that denigrates femininity of a more fleshy (and attainable) kind. So the point of écriture féminine is precisely to bask in this alternative aesthetic, to valorize what has been shunned.  So perhaps some of the (ok, my) discomfort with the idea is simply internalized misogyny. But we have also learned, some of us, to be leery of the whole-hearted embrace of the personal, which is so often effused to the detriment of a consideration of the structural. White feminism, in particular, is frequently linked to an adamant demand for feelings to be recognized, validated, at the cost of broader awareness of the feelings, and plight, of other women.

I say all this to explain why, when the opening lines of A Ghost in the Throat announce, in all-caps, that THIS IS A FEMALE TEXT, one may not immediately feel a surge of enthusiasm (those who do will hardly need me to persuade them to read it).

Doireann ní Ghríofa’s new book performs the remarkable feat, however, of restoring the sense of urgency to the notion of the feminine text, paying poignant homage to the various ways and things that women create — poems, but also shopping lists, and domestic spaces, and relationships, and children — often in the interstices of masculinist histories from which they are later erased, if they ever appeared at all. A Ghost in the Throat tells the story of the author’s obsession with an 18th century Irish poem, The Keen for Art Ó Laoghaire, and its author, Eibhlín Dubh Ní Chonaill. The poem — a chronicle of Eibhlín Dubh’s romance with her (second) husband, his murder, her grief, her curses upon his killers and their accomplices — is, Ní Ghríofa skillfully shows us, astonishing, a miracle of vividness, verve, sensuality, and rage. But its author is generally known primarily in relation to the men in her life — as the wife of her murdered husband, or, sometimes, as the aunt of the famous politician, Daniel O’Connell. Ní Ghríofa sets out to learn more, and brings us along on the journey.

The work of recovered history is perhaps always a deeply intimate project, one that implicates the searcher as well, and it is also a project that invites imaginative speculation, and a fictive recreation of the subject’s world and inner life. In this case, the obstacles that present themselves in the hunt for traces of Eibhlín Dubh’s life, the contemplation of her person, are inextricably bound up with the nature of womanhood. As A Ghost in the Throat gradually makes us understand, the story of Doreen Ní Ghríofa’s project therefore must be as well.

This begins in the first chapter, as Ní Ghríofa describes her experiences as pregnant new mother, pumping milk to donate to strangers, being reminded of an old poem she read in school when she drives past a road sign bearing a familiar name, and after days of racking her brain, recalls that it is the name of the cemetery where that woman’s lover was buried. Waiting for her oldest child to get out of school, she pulls up the poem on her phone and reads it. And then again, and again, at night when others are sleeping, and in the blank spots of her day, as she pumps. To donate your breastmilk is to double down on the altruism of breast-feeding, to give of your own body to another as food. One of the most memorable details in The Keen for Art Ó Laoghaire is that his distraught widow gulps down handfuls of his blood. And so we see the beginnings of the book’s skillful weaving together of various ideas, ways of thinking about the body and the things that it makes, the gifts that pass from one body to another, such as breast milk, or the words of an oral poem that are transmitted from one speaker to the next across time and space, or the knowledge that a cadaver offers to aspiring medical students.

Ní Ghríofa collects various translations of the poem, then begins to seek out biographical information about its author (and to create her own translation). As the text progresses, she tells the story of Eibhlín Dubh’s life so far as she can reconstruct it, which subtly shades into a recounting of the events of the poem. The words of the 18th century text are given a new force, woven into the tapestry of a larger life story in a skillful blend of paraphrase and direct quotation. We learn of the poet’s childhood, her first marriage, and her return home, giving added context to the moment Eibhlín Dubh first set eyes on Art (“how my eye took a shine to you, / how my heart took delight in you”). For readers unfamiliar with the poem, there’s a kind of thrilling suspense in the way Ní Ghríofa takes us through the tale — we know it will end badly, but we are nonetheless gutted when it happens. And so too, we witness Ní Ghríofa’s efforts to learn more about the past, an effort that we know can never be entirely successful, though we still feel a thudding sense of disappointment when it is. We move through fruitless visits to archives, running our eyes over long lists of names in birth and baptismal registries, looking for any sign of this remarkable woman, or her descendants. And we learn of Ní Ghríofa’s life as she does so, of her visits to the various sites and the conversations she has with tour guides, and the memories and revelations from her own past that these encounters spark.

And so, as we hunger for more of Eibhlín Dubh’s story, and linger mournfully over the silences and gaps that keep her from us, we are granted access to the kinds of details of a woman’s life that are the very ones missing from the historical record. The dawning realization of this unfolding concretizes, in a remarkable way, how women’s experiences tend towards erasure, and silence, even as they create worlds. We watch as Ní Ghríofa gives herself over to childcare, to laundry, to moving house, to the sleepy high of hormones that a new baby infuses you with, to creating a garden for bees and lists of things that need doing. We see her studying the changes to her own body. We witness her wrestle with the contradiction of motherhood — that it is a form of creation, but one that comes at a cost to self. This theme of intermingled losses and gains, of love and mourning, is one that pervades the entire book, like a jewel whose facets twinkle as it is rolled in an open palm. We hear only in passing of Ní Ghríofa’s poetry (she has written multiple books of it). As she continues to seek out more of Eibhlín Dubh’s life, we begin to worry, as does she, about the costs of this obsession, to wonder: how can it end? And it is the way that she brings the story to a finale that makes us most clearly aware, perhaps, of how skillfully the book has been constructed throughout.

The structure of A Ghost in the Throat echoes, in a way, the structure of Eibhlín Dubh’s poem. Each chapter is a stanza of sorts, self-contained and distinct, yet contributing its portion to the larger whole. And within each chapter is a careful braid of the various thematic threads that comprise the delicate architecture of the overall text. Return to the first chapter after you have finished the book and you’ll find that it’s all there, the myriad themes that surface throughout, only you didn’t recognize them, then. Flip back through the pages and you will be startled to notice that things are not at all in the order you remembered them — that your mind has reconfigured the various elements, grouped them anew, and that returning to various chapters, a new element will emerge that rearranges the constellations once more, or reveals an entirely new strand of associations and ideas. So too, you arrive at Doreen Ní Ghríofa’s translation of The Keen for Art Ó Laoghaire, appended to the end of the book, and find that you feel as if you knew it already, in an intimate, bodily way, even as it also feels entirely original, extraordinary.

A Ghost in the Throat is, first and foremost, an homage to a poem, a powerful case for the appreciation of a work of 18th century writing that many will encounter only as an obligatory assignment in school, if ever. It is also the story of a process of research, which sheds fascinating light on the work of historical inquiry, and the ways we seek to understand, and connect to, the past. And it is a reflection on motherhood, and women’s experiences, a story of how one person manages the seemingly impossible demands of balancing duties to home, family, self, and art — a meditation on what a person leaves behind. 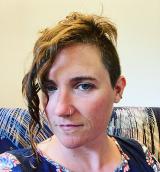 Katarzyna Bartoszyńska is an assistant professor of Literatures in English and Women's, Gender, and Sexuality Studies at Ithaca College. Her book, Estranging the Novel: Poland, Ireland, and Theories of World Literature was recently published by Johns Hopkins University Press. She is also a translator, from Polish to English, most recently, of Zygmunt Bauman's Culture and Art and Sketches in the Theory of Culture, both published by Polity Press. She is also an Educational Arm Assistant for Asymptote, and was a judge for the Best Translated Book Award in 2018 and 2019. She keeps (or tries to) a blog about books and movies at kasiapontificates.blogspot.com.