What If a Little Bone
Say that god is out to lunch. What if a wasp settles on the fried chicken. What if god gets
a little bone stuck in his throat and coughs up an alternate universe. We’re living in it,
aren’t we? What if god forgets how he jury-rigged us in the first place. What if the spine
is a ladder and the tongue a rope. Some days you climb the rungs, other days you make
the noose. What if you could send a billion Forever stamps through the mail and get back
an authenticated copy of god. You could set it on the shelf and it could watch you eating
supper. Even so you’re quite alone. What if when you cry for your lost mother, the copy
god mutters tick-tock. Where is the border between now and heaven and do you need
identification to cross over and will your spit suffice. What if there’s a wall up there,
higher than all the bone ladders on earth stacked end to end. What if the hole to hell is
right here in the backyard, just as your kid’s friend said it was. What if children know
everything that matters, until they forget. There is no salvation from that much ignorance.
What if god says he’s sorry for laughing, but sweet jesus, how he needed a laugh.
Hunt
Daily I hunt the silence that endures this city. It’s said to nest under sidewalks, ride the
winter contrails. Many ordinary things are rumored to contain it: ball bearings, silverfish,
the disowned shredder on the curb. But I can’t find a trace. This morning on Eighth Street
I thought I felt it feathering the little wind, until the brick cleaner’s pressure washer
growled and bucked its hose. Startled, I stepped on black ice and went ditch-sliding like
that woman’s car in the weather app video. (To her rescuers she kept saying, tearfully, I
was only trying to calm the baby. And when she stopped talking you could almost see
it—silence opening its throat inside her heart.) Somehow I kept my footing. A passerby
averted his eyes; who knows what he was hunting. Our skulls functioned perfectly as box
blinds, obscuring whatever bided within. Then a mourning dove called Hey you, you, you,
and my mind swung around like a telescope. I looked at myself through its wrong end. A
fierce silence rose up inside me, scraping its beak on my spine. See? it said. It was silence
that thought me up in the first place. And makes me still.
Casper
A milky moon was rising on the Fireman’s Fair when the shelter guy waved me into his
booth—an old Mister Softee truck lined with wire cages. It was your typical story:
somebody’s uncle had died, leaving a passel of cats. Take your time! the shelter guy said.
But we were already in the time of breakdown. The workers were chasing off the snot-
faces, reeling in the jiggy lights that festooned the fairgrounds. The shelter guy was a
holdout. I could smell the sulfur of his righteousness. I passed over all the pretty ones and
knelt before a black molly. She was flat-eared, dull as roadkill. The shelter guy said She’s
a biter, that one, and I knew she was. But I felt my third eye roll up: Signs point to yes.
I took her home and fed her the finest offal. For a year she never looked at me. If my
hand hovered, she clicked her teeth. I named her Casper, after the Mayan king whose real
name nobody knows.
One day I said her ghost name and she remained visible. She yawned, and I saw that
somewhere in the back-time she’d lost a fang. When she sank the other, it was for the
miracle of blood. I understood that she wanted little from me, only fish heads and a
change of dirt. Some nights as I lie in bed she comes to smother me. Her throat makes the
sound of locusts. She licks my third eye until it sees a future. Hazy, with biting flies. How
I love her mercy.

Rapture caused the sheet lightning behind p. 11.
The women carrying rebar through the gutter spaces should be bull dykes.
And is always singular.
The narrator, I, has synesthesia, not amnesia. A lowercase i tastes like salt.
P. 47: The letter e is not an earplug. (The letter Q can be so configured in a pinch.)
The men hosing off the marginalia should be wearing pink camo.
But is as naïve as a chicken.
The narrator’s sequiturs will be ticketed for code violations.
P.227: The flashback is marred by the static of yearning.
The kids installing the commas should be orphans.
Yet drags its chained foot.
The narrator has been detained for lucid dreaming.
Because twitches its trigger finger.
The narrator regrets nothing. 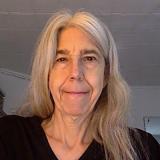 Sylvia Foley is the author of Life in the Air Ocean, a collection of linked short stories. Her fiction and poetry have appeared in various journals, including The Antioch Review, The Cincinnati Review, Open City, Typishly, and The Literary Review, as well as in On the Rocks: The KGB Bar Fiction Anthology. She received her MFA from Columbia in 1996 and has been a fellow at the Virginia Center for the Creative Arts and Yaddo. Sylvia is an early writer to appear at the KGB, reading y’s story, published in the 2002 KGB Reader, On the Rocks, edited by Rebecca Donner.