And I, an everburning pilot,
Lead forth the exhausted people,
And neither peace nor battle
Can I foresee ahead.

I started this review before the Russian invasion, so in avoidance of tone-deafness, I’d like to suggest you seek out humanitarian anti-war efforts.

I first came across Leonid Schwab’s poetry on the Brooklyn Rail’s InTranslation site, wherein his first line is “I’m made out of cheese my head is that of an old man.” I immediately knew I was dealing with something special. Although the rest didn’t prove to be so surreal, I embraced the themes of the weary travelers and forgotten details. Schwab’s work embodies the open lens state while travelling, how we notice more as we journey through new territories.

When I heard Cicada Press was putting out a book of Leonid Schwab’s work as the collection Everburning Pilot, I quickly followed the trail. I can already say this is a great achievement, triumphant klaxons for all involved. The translator’s list is a long one, nearly 20 translators are credited here, for about 75 poems. From the translator’s note, these translations have been refined and discussed with great care during the Chicago Translation Workshop as well as the Your Language, My Ear workshop. I love reading about the path these translations took, the culmination of individual and group efforts. We can be sure that Schwab is in good hands.

The introduction to this book is a treat all by itself, In Memory of Memory’s Maria Stepanova (here translated by Sibelan Forrester) offers us “CELESTIAL ARCHAEOLOGY: On Leonid Schwab’s Poetry.” I have always enjoyed poetry intros, with their framing of frames, and Stepanova’s is no exception. Stepanova gives us poetry about poetry: “the powers of language, all its smart machines work to establish a particular temporal state on their own territory, to condense each line into a radiant amber concentrate of that very happiness.” The intro is a loving summary of Schwab and his milieu. Stepanova explains how Schwab’s work is emblematic of his group, the “new epos” poets, while being mechanically singular.

From a bird’s eye view, Schwab’s poetry concerns the traveler, locations, destination, and the moments of rest along the way. Schwab’s narrative moves along an undisclosed journey, noticing people, buildings and landscape, how they all form to create the voyage. This is a 20th century Bashō moving through Bobruisk, Jerusalem, Russia, Mongolia, Pakistan and Manchuria. Zooming in on the lines themselves gives us brushstrokes of moments, modernist jump-cuts and all manner of temporal shifts. Some characters are zipping around, some are steady movers, and another is stuck at the airport.

These translations are finely wrought and attentive, with syllabic care throughout: “And supper, like the surf, comes over them” or “Dinners afield are no big deal”. I want to quote this whole book to you; every other line could be its own poem. Having this many translators on one collection gives us a full toolbox of techniques and diction. For example, I learned the word “violaceous” from this line:

The above quote shows one of Schwab’s brainteasers, I find myself drawing crisscrossing lines between each noun. The many relationships of objects action and people create a blooming flourish in my mind: fish-pokes, dill-soup, man-fork. The temporal quality of Schwab’s work is also worth mentioning. At moments, a piece will feel timeless and then a cola will appear. Or a modern jet, helicopter, or cosmonaut pilot becomes the eponymous everburning pilot who is the eternal warrior defending the people.

Most people in this collection are named by their occupation; these are poems of house painters, wood workers, station clerks, subcontractors, and builders. As every object is in use, so are the humans. Schwab shows motion through the interconnectedness of action and movement, even locations are action-oriented: fenceposts, cellars, reservoirs, and a museum bench. There are no useless vistas, flora, or virtues; everything is employed. I’m also impressed that this collection spans from 1987 to 2016; Schwab has been putting out amazing work for four decades. Despite this, the collection is cohesive, and I wouldn’t be surprised if someone told me they were written all in the same year.

The spheres of poetry, translation, and contemporary Russian literature can rejoice in the arrival of Leonid Schwab in English. If Stepanova says that Schwab’s influence is now permanent on contemporary Russian poetry, I hope that we see that influence on more poets. Schwab, like Osip Mandelstam, writes poems that are both contemporary and timeless. I thoroughly enjoyed this collection and look forward to returning to it for years to come.

Thank you to KGB Bar, Anastasiya Osipova at Cicada, and Olena Jennings for being ever supportive. 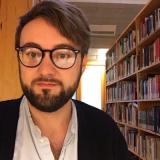 Jordan Barger is a translator living in Philadelphia, heading to University of Iowa in 2022 for the Literary Translation program. His work has previously taken him to Ivar Aasen Tunet in Ørsta, as well as the British Center for Literary Translation’s Summer School for both Norwegian and Danish. Currently translating the late Danish-Palestinian poet Yahya Hassan. His work can be found in Action Books, FENCE, The Brooklyn Rail, The Poetry Review, Firmament and Delos.