Making Love in This Language

I've never made love
in Romanian, never moaned in my native tongue.
Though I've laid on mown lawns wondering what my parents gasped
when they made me.
Or what they faked when
making love to their latest US-born
spouses in this language with countless words
for anger, for abandonment, yet none
to inhabit the rawness of flesh after sex,
none for that sacred spentness.
Maybe ecstasy is a sport
in a stadium my friends swear
the South rises again each time
cheers avalanche over crowds,
bodies bound by the oneness of winning.
Or one nation under nothing

I still can't
choose between these two
forms of hunger--belonging, believing--
or call one need truer than poetry, which may be a word for imagining
how my parents carried those balkanized verbs for hands
over oceans, and if the motions felt foreign
as they rubbed their naked bodies
against the romance of that dumpster-
found mattress in the room with no music,
no history, one chair choired by cockroaches, the skin
and bones of two aliens
biting each other's shoulders
to keep from waking the well-fed
kids in their american dreams.

I thought five feet of snow in Alabama brought me closer to Emily
Dickinson's white space.
I thought saying the pledge of allegiance was the absolutist promise.
I thought putting a hand on my heart while saying the pledge was like
having scared sex in public.
I thought not saying the pledge would protect me from lying
or losing my clothes.
I thought lying was touching the colors of feathers too quickly with
one's tongue and not being sorry.
I thought the woods behind our house were haunted by green horses.
I thought horses were jealous of ponies because ponies get to carry
toddlers and eat apples.
I thought eating an apple under the dogwood was the closest an
afternoon crawled to heaven--and heaven, itself, was never finished
by the words we used as bricks to ground it.
I thought being haunted was better than being popular since
my classmates couldn't see the future.
I thought school was punishment for hearing trees talk
before rainstorms.
I thought going for alone-walks wove a friendship bracelet
between myself and the land if I did it in complete circles and stepped out a
small X at the end.
I thought the sad boys in books were my friends.

Like tired squid legs
Like a door left
ajar for good fairies
I write zero of interest
to in-laws arriving tomorrow
O lovebug or rose
slug or whatever is bigger
given a little god who
can't forgive me
One half of us
watches another
fight light fires
Fear is nearer
than my unfilled cavity
O dentist, I miss you
O hot springs without naked swimmers
I am holding this body back
from your wet wet mouth
to watch the red-breasted boy-bird
twiggle across a branch, believing
in its bewilderment

from the Silvina Ocampo series:

[dying is ridiculous, but they were so meticulous, so precise.]

The dead are still gossiping
as the world ends & some of us know it.
We want to be mentioned when
the seam-ripper opens the eyelet.
Lace dress: first time
I felt femme.
Costume on the floor of his houses, apartments, hostel beds.
I marked up a map of Paris with places we fucked. Places we
wept. We met
in cold cathedrals and found ourselves separate,
sainted by endings.
Birth control, be my gamble, my hot
rolling die. Gambit of rambling through statues. Leaving notes for dead writers
on graves. I lost maps to find
new words for home.
Anywhere except the hospital, I told
the throat-coated one.
Hora: start with
a horn.

[Wherever. On the corner, at the ends of the earth.]

O little ram, he wrote in a letter
to the animal he loved
what he made
O fire,
O petal,
O fiest-tongued one
I have been many
and none
who were nameless, sewn to
diminuendo.
Affections' formal con
straint is too little
too late, the decadent aubade.
Hora: start with
a haystack.
Bless the demons who protect me
from self-actualization
by wrecked flesh, the accident.
I am endless in the bestiary
of my personal choices,
the animals I have
been, the entries.
O public fountains
in plazas at night
only statues do not
lift their eyebrows.
Seeing everything
numbs.
Paris again, that atrocity.

My child washes raindrops.
My son scrambles eggs from lightning.
My other calls thunder by its middle name.
House of storms, espouse tenderness.
Famous cowbird technique
is the auspice of poetics. Craft of reclaiming
lost marbles. A woman alone on a lawn
but for apron. But for bulging
fern spores on the frond's
underside.
The ostrich is why I leave the zoo and lose my kets in the shrubbery.

Maybe everyone's mom becomes a metaphor for not looking into mirrors. For not
seeing love when it martyrs itself in strokes of redundance.
Stations of the cross, baroque me. Gild me with boutique vibes in your Catholic
cathedral on Sundays, frothing skirts for the glory of sainted eyes.
The world has changed since widows stopped pinning brooches to their outrageous
breasts. Everyone has lost something but I kept
looking. I undressed every last one of them: the plaster saints, Pippi Longstocking,
your mom's worried thighs, the litany.

[I love the merry-go-round music.]

Filip, the poem is an animal with unforeseeable
whiskers. Ideal scientists shiver
at what they can't classify. Remember how
I rescued the fish by sneaking
it into the empty tissue box? The shock
when he died after water soaked through
the cardboard sides, split the sky of my first
lament. I blame the box for this
failure. I hold the premise of vessels
responsible for what doesn't thrive
inside them. As for doctors, all have been
paid for their labor in checks, in
smiles, in gratuitous patients, the virtue
of silence. The poem is a terrible
animal whose pain remains nameless.
The box saves the scent of
dead fish as a memorial in the child's mind.
We should have run from
home when we knew the hurt was coming.
The poem is the fish preservative.

* All poems are titled with lines from Silvina Ocampo's The Promise (translated by Jill Levine and Jessica Powell). The original punctuation and capitalization of the source text is preserved in the titling. 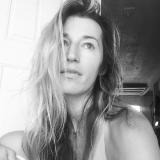