I have been the grateful beneficiary of Karen Green’s generosity and the artwork she has made available to me to share with readers in each of the issues of the KBBBAR Lit Journal this year. Her vibrant, colorful, and uniquely enchanting work has not only enlivened the fiction and the poetry in which it appeared, but also, as in “Mr. Brother,” by Michael Cunningham, the original depiction she painted of the two characters brought them and their situation to life in a dramatic and new way for readers. I am moved to share Karen–the artist, the woman, and the writer with you,–and provide information about where you can view her work in the bio below, to learn more about her project of uniting the visual and the literary, and understand the inspiring ways she sees and comments on her world. Thank you to Karen for adding so much to the magazine and its fiction and poetry throughout the year.

Zumhagen. Karen, you are so prolific, and your work often has a playful, childlike quality. I wonder if you painted as a child and if you were always interested in art?

Green: Most of my earliest memories involve either a toddler's ecstatic visual discovery (the sparkling asphalt of a city sidewalk underfoot, an ice cream ordered to match one's sweater), or art as a method of transporting oneself elsewhere: If my brothers were watching dreadful Sci-fi television, I could sit in the corner with my crayons and join the circus by drawing it. That's a benign example, but the powers of escape and transformation were there. So yes, looking and making have always been inseparable from my daily life, whether I thought of it as art or not. I was always interested.

Zumhagen: You have such an interesting way of seeing and representing the world and certain locations. Where did you grow up, and how did you come to use detritus and unusual objects to paint on?

Green: Thanks, Pat. I grew up in just outside of San Francisco in what was then the affluent hippie suburbs, before it was cool to flaunt your wealth, which was good for me because I was the child of a jazz musician who was neither affluent nor bohemian. My childhood was chaotic in the typical ways a childhood is when there is scarcity and substance abuse involved, but I was surrounded by riches. Not just white suburban wealth, but the riches of the natural world: redwood forests, rolling oak-dotted hills, brick red Golden Gate Bridge against the Pacific Ocean, plus excellent espresso. You get the picture. So I was weirdly, visually spoiled and spent a lot of time wandering outdoors, a snobby forager in training. I remember a particularly bad Easter Sunday, I was maybe nine years old, some relative throwing plates in the kitchen I think, and I ran down the street to the classic pharmacy (glass countertops, lady with lavender bouffant behind them), closed for the holiday. There was a big dumpster in the back parking lot and I climbed into it in my little smocked dress to pull out a bunch of discarded "tester" perfume bottles. Not only did they have a little rich lady scent left in them, but the labels and fanciful shapes excited me. There was a brown one in the shape of a heart I held onto way into adulthood. I guess I was a guttersnipe and dumpster diver from very early on and still am.

Zumhagen: I love your clear memories of seeing the beauty in the natural world or even just the art worthiness in the light on the street or the playfulness of the escape, for example. I also love the juxtaposition of this first story of yourself with your guttersnipe and dumpster diver identification. It presents an interesting dichotomy that prompts interest in how the dichotomy translates into your art. So, how would you define your art and what would you say drew you to your method or way of expressing yourself . . . the kind of art you do?

Green: Whenever I'm asked what kind of art I do/make, I always struggle to give a decent answer. It's very hybrid, it's all over the place, it's collage. I don't want to sound self-disparaging; I don't disparage it. It is, however, still "play" for me-- serious, prioritized play. My worst recurring dreams is one where someone takes away either my paintings or my tools. As you know, three years ago my house was destroyed by fire and losing all my art and the precious junk I had collected over the years was by far the worst part of the process. I had nothing to work with. I did make some drawings from the charcoal of my burned front door. What compels me is always the thing in front of me, whether it's physical or emotional loss, the forest, or rusted sardine cans dumped in the desert.

Zumhagen: How terrible that you lost all your art and your tools . . . though the mark of your true artistry is that you used the charcoal from your burned door to create. I love the idea that looking and making of art have always been inseparable from your daily life. I wonder with this in mind, how your art has changed with the times and over time– especially as your art seems often to serve as a commentary on the thing that is in front of you . . . or to provoke response?

Green: I think because of the way I work, it's always changing, dependent upon the "tools" life is offering up. For example, the recent plague sent me into the forest and the desert, the forest floor offered up the supernatural realm of mushrooms, the mushrooms ended up in the work and also on pizzas. The desert offered up endless pink skies but also shocking dumping grounds of all manner of human detritus, not the least of which are the ghosts of disappeared women (It's sobering how many Jane Does are found in the desert). So right now, I'm thinking a lot about extinction, human and otherwise. I'm thinking it may be necessary for certain types of humans to go extinct.

Zumhagen: Your mention of the desert being a dumping ground for disappeared women, and the Jane Doe reference brings me to the political aspect of your art. In addition to calling attention to a throw-away society by painting on discarded sardine cans etc., your amazing book, Frail Sister, that Ryan Chapman calls “a searing portrait of one woman’s destruction by men and their institutions in 20th century America,” surely also takes on the politics of feminism. He goes on to say “It’s also an ambitious collage attempting to place the reader within an imagined consciousness—typically the provenance of prose literature." Can you speak to this?

Green: Well, first let me say that “Believer” review was probably the best one I'll ever get, so thank you Ryan Chapman, forever. Frail Sister started out as research into my aunt who had disappeared before I was born. The more I looked for her, the more ghosts I uncovered, in my family and otherwise. I suppose the personal became political pretty quickly, although Trump was yet to be elected, “Me Too” was not yet a backlash or a movement; I didn't really see the book as political when I was concocting it, nor did I think the powers that be would pay much attention to a difficult-to-decipher murder mystery/thinly disguised commentary on sexual trauma. Actually, by the time of publication, not so many people DID pay attention to the book, what with the world at large tweeting so hard and loud, but the timing was interesting, and my readers were surprising and wonderful, if not plentiful. I guess I think all art is political, as it is confessional. Whether the artist is actively ignoring the political landscape or completely inventing characters, the subject matter we are interested in or NOT interested in says a lot about what matters to us politically. Could a vote for Trump really be a vote only about the economy? A Trump vote was always a vote for racism and misogyny. So yeah, Frail Sister was a vote for the sisterhood and a big vote against pervy relatives and toxic dudes.

Zumhagen: Do you have a history before Frail Sister of combining art and storytelling or was this your first attempt?

Green? Yes, I do, and trying to marry the two seamlessly is a continued source of joy and frustration. Quite a few years back I published an alphabet "flip" book (now out of print) which told the story of falling in and out of love as you turned it over. My book Bough Down was published by Siglio Press (who also published Frail Sister and whose specialty is the intersection of art and literature) in 2013, and was comprised of prose chunks and miniature collages. With Frail Sister I tried to take it a step further by having the text hand-typed and entirely embedded in the visuals, which was a bitch when it came to copy editing.

Zumhagen: Chapman also remarks that “If we step back from the narrative, the scope of Green’s achievement comes into view. She’s managed to integrate a nuanced literary voice, a rigorous visual aesthetic, and an entire life story into a masterwork. That is Frail Sister. It isn’t a story. It’s a memorial.” This is a great tribute. Did you formally study art or writing? Have you always been interested in writing?

Zumhagen: Karen. Thank you so much for thinking on these questions and providing us with a deeper and broader understanding of your work and your inspiration. I loved getting a bit of history and thinking about your future, and where you are going next, etc. It leads me to ask the question that involves your legacy. As an artist what do you hope to be remembered for?

Green: Subversion, maybe? Generosity? Bringing down the patriarchy? Communicating something essential? Giving solace? Making someone laugh and cry simultaneously? That's a difficult question, probably because when I think about it I realize how bad at archiving myself I am. Recently it came to my attention that my Wikipedia page was completely erroneous-- wrong information, wrong photograph of a wrong person. I'm not sure I want to change it because I think it's wonderful, but that is not to say I don't want to make work that is alive at the time of making, that keeps living, that is memorable to somebody. 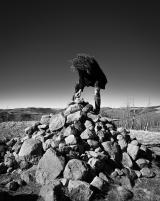 Karen Green is an artist and writer whose inventive hybrid image-text works have won her a devoted readership. She's the author of Bough Down (Siglio, 2013), winner of the Believer Poetry Award, and the fictional archive of a missing woman, Frail Sister (Siglio, 2018), a finalist for the California Book Award. Her visual work is collected by individuals as well as institutions, including the Yale Beinecke Library, San Francisco MOMA, and the Whitney Museum of American Art. She lives in Northern California, and New York. Her work can be viewed on Instagram @theartistformerlyknownaskaren