The first time I went in a boat, I was about four years old. It was in Maine. I was in a tiny sunfish and I was terrified, afraid of falling out and drowning, but my aunt held my hand as the boat bobbed near the shore. With her touch I knew everything would be alright. At that time, the water was a source of fear, because even then I understood its tremendous power to take life. At home, there was a brook where I pretended to fish and watched the rushing water drag fallen leaves through its current, twisting them up in its own churn.

Years later, I attended college along the Connecticut River. We were required to take physical education classes, so I threw caution to the wind and enrolled in whitewater kayaking. I marvel at how unafraid I was of the rushing river and the rocks I could be dashed against, the sharp surfaces that could break my bones. I was keen to absorb the instructor’s directions about how to right the single-person kayak if it capsized, but instead of being scared that I’d be trapped under the boat, I was exhilarated that I could maneuver inside of it, shape its direction, change its path. The water was alive and so was I and together we could move objects.

Soon after, during my junior year abroad in Glasgow, Scotland, I eschewed an umbrella, leaning into the rain that fell every day, sometimes for an hour, sometimes for fifteen minutes, absorbing it like a refreshment even. Again, I felt the reminder of being alive as the drops of rain caught in my hair and fell into my eyes. The rain changed something, even if slightly, about how I moved through the streets, making things different than they would be if it never existed.

More than a decade later in NYC, I developed a habit of swimming laps at the local YMCA. In the water, like nowhere else, my mind could be soothed but invigorated: all the detritus clearing out, leaving nothing but taut, logical thoughts like the numbers I counted to myself as I went up and down the lanes, methodically, rhythmically, weightlessly. In the pool, it seemed I could swim forever without tiring. During the pandemic, the pool closed temporarily and I lost access to the liberating sensation of doing laps, the repetitive invitation of the movement.

Movement, and the freedom it offers, has always been important to me. As a toddler, I would spend time in a playpen. When my mother discovered I didn’t like to stay inside it, always asking to be taken out of it, she came up with an innovative solution: she cut a hole in it so I would know that I had the freedom to leave whenever I wanted. With this adaptation, she says, I was content to stay inside the playpen for hours.

When I stayed in the psychiatric hospital in my thirties, movement was tightly restricted. The unit was locked and, for the majority of our stay, we weren’t allowed to leave its confines. Visitors came to us at specified hours through the locked doors. Getting too close to the doors was a violation that would result in confiscation of your street clothes, which would be replaced with flimsy hospital apparel. One evening, I took all my roommate’s velvety dresses from the hangers where they were carefully arranged and piled them on the floor next to the window, in what I thought was preparation for tying them together to climb down the side of the building and escape. My efforts were interrupted – with no one to open the window to offer me the knowledge I could leave should I wish to, which, according to the logic of my early childhood, might itself have been enough to convince me to remain inside where I belonged.

Close to the end of my three months’ stay, we were allowed to take short, supervised walks outside. But on our journeys beyond locked doors, there were no bodies of water to promenade alongside and no rain fell overhead. Cold, immobile concrete surrounded us as we squinted in the sun, unaccustomed to its brightness. Inside the unit in art therapy, I painted a beach bucket, full of hermit crabs, set before a background of sand and waves.

Making choices has always been difficult for me, but like water, they are vehicles of power.  My neighborhood in New York City is along the East River and, in 2020, I could visit the nearby riverside park. A fence separated me from the water itself, the life-giving source. Still, during those lonely pandemic days before the vaccine, visiting the waterfront helped give me a kind of peace I could not find elsewhere. Every choice that I made seemed full of the possibility of life or death. I could get sneezed on at the laundromat, so I started using drop-off service. Someone could cough on me at the deli or grocery store, so I began ordering my groceries online. Meeting men in person could result in a painful death, so I held phone and Zoom dates.

The pandemic took away my chance to go to the ocean in 2020, so when I returned there in 2021, I was ecstatic to bop up and down in the waves, letting my long hair drag through the water. At my favorite beach, I reminisced about my girlhood, spending hours in the tide pools, watching the paths in the sand that showed where snails had crawled.

Most of our bodies are made of water and perhaps that is why I feel so at home in it. Every summer since I was ten – thirty years now excluding the year the pandemic stole – I have visited my godmother in Maine and spent time at the ocean. It could be that this consistency is also what makes water feel like home, like a natural place to return to again and again.

Water is an instrumental part of the story of Jesus, from his baptism in the Jordan River to his turning water into wine to his preaching on the shores of the sea. And for me, water is the grandeur of God, the vast wonder of the universe, the amazing properties of a substance that is life-giving, the molecules that hold my body up.

But water can also take life – and that is perhaps what instills respect and fear. My father, nearly 75, almost drowned as a young man and for this reason he won’t jump off the diving board of the pool in his backyard, not even wearing a life vest. Every summer he says this is the year he will and every summer the life vest remains hanging in the pool room, unused.

While my mother may have given me the opportunity to make a decision when she cut the playpen during my toddler days, sometimes my parents have feared the choices I’ve made. During a study abroad program in Argentina, I planned to go to Patagonia with two friends over spring break. My parents were concerned about the safety of the planes we’d be flying in – imagining them crashing –  and warned me that they did not approve of my decision. I remember being on the other side of the equator from them and hearing the anxiety in their voices, as they tried unsuccessfully to dissuade me from the adventure.

On that trip, we experienced amazing horse rides with legitimate gauchos and clear natural lakes on the Camino de Siete Lagos or Path of Seven Lakes. The water was bluer than anything I’d ever seen. It was as if my parents’ worries had sunk to the bottoms of the pristine lakes, forgotten, unheeded. What replaced them were vistas of clarity and beauty that I remember decades later.

As a child I believed I’d be a famous writer and live by the sea in Maine. That hasn’t come to be, not yet, but when I think of the dream, it’s mostly the ocean that I see, taste, and hear. Once I rode the Staten Island Ferry in my thirties for fun with a friend, there and back, not bothering to leave the ferry terminal when we arrived, simply turning around to board the boat. The ride, moving along the water, was the experience we were after.

Given the opportunity, I’ll always choose the water. 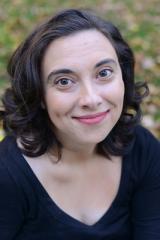 Cynthia-Marie Marmo O’Brien is a writer, editor, and educator whose work on faith, imagination, and depression was selected for the Best American Essays notable list. Her reviews, interviews and essays have appeared in America Magazine, Bellevue Literary Review, Killing the Buddha, Los Angeles Review of Books, Narratively, and The Rumpus, among others. She has taught writing in the United States and Europe.