The plague descended suddenly. It caused no surprise.

The towers downtown became polymer and styrene spires. Cars plasticized to opal propylene as their tires fused into the cement of coast routes.

Famine set in. Others followed the fused strippers: Melrose sidewalks crammed with mannequins in aspect of shoppers, peering into jewelry store windows. The skin carameled in the California sun into dulce de leche, the eyes shining.

Those who could afford horses fled northeast into the Rockies, but seemed to bring the plague. At the ends of shotguns they were turned from mountain towns, the road an eel of crisp resin at their heels. At the east base of the American Cordillera, the Armed Forces erected a battery to halt the movie moguls and stars, haggard advertisement tycoons and champion surfers, whose wealth and love of good living kept them before the blight. The Rocky Mountains vulcanized under their tired feet. Their horses hardened. Ice slopes glacéd. Tors—Bakelite—reflected the sun like knives of obsidian as their clothing fused into their necks. The cursed Californians stared from ledges amid rubber pine, a long show-window of alp trekkers between seasonal shipments; they stared, doleful, across the rolling living grass of the Great Plains, from which their forbearers brought crop to the Central Valley and to which they ushered death. Slowly, bodies catalyzed and howitzers fired upon screaming mannequins wobbling down interstates.

The plastic blight ended at the Great Divide. As the nation mourned the West, agleam every sunset like a derelict candy land, the Midwest and East Coast conceded the logic of such a plague coming from California.

A gold blight hit New York. The silver hypodermic of the Empire State pushed gold into the sun. The Chrysler Tower and architecturally vervy investment banks in lower Manhattan rippled and shone. The auric creep pursued investment bankers and commodity men through Ohio. Heavy artillery eliminated them in the rolling corn. 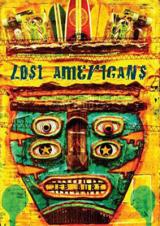 Jeb Burt is the author of the short-story collection, "Lost Americans" (PS Publishing.) His work can be found at his website at https://oidil.com/