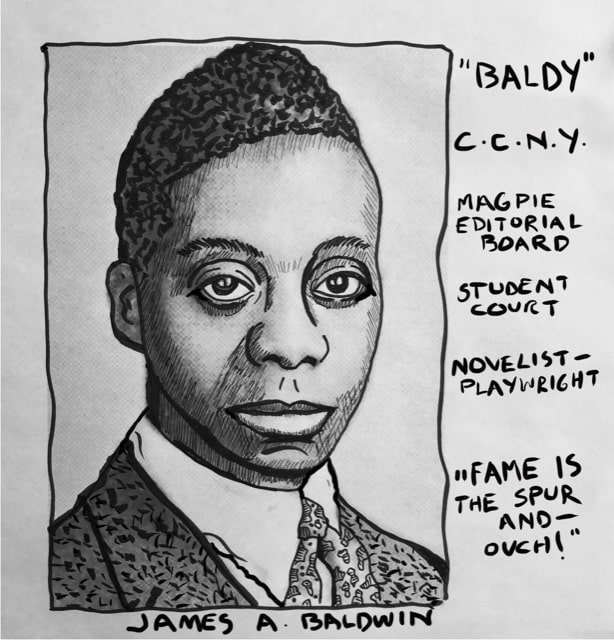 I had seen notices in the Dutch papers that James Baldwin would be signing books at the Athenaeum book store on the Spui.

Not wanting to miss a chance to see an idol, I noted the day and time.

I biked over on a Saturday mid afternoon, very hot and very humid, crowds and a long line, all of which Amsterdammers do not handle well.

A table had been set up under the red and white awning by the wide open entrance, near the racks of magazines and newspapers.

There was a pile of books; I wasn’t even sure which book he was there to sign and I was not going to purchase one anyway, since it would have been a Dutch translation and prohibitively expensive.

The line snaked and slowly pushed forward; soon I could see him in his chair, head bent over, signing and chatting a bit. His forehead was wet and he appeared somewhat uncomfortable, tired, and slightly distracted.

Finally I got to the table, nervous and in flustered awe, trying to collect my words and knowing I would have to rattle them off very quickly.

He gave me a slight smile that broadened a bit when he heard my NYC accent.

Rapidly, I blurted that I was living in Amsterdam and was a Dewitt Clinton High School graduate. I had been art editor of the literary magazine, The Magpie. I knew, of course, that he had been literary editor (with Richard Avedon) as art editor) before he graduated in 1942.

As if inflated with some magic oxygen, he perked up and straightened and suddenly that wonderful broad smile spread across his face. He looked directly at me with those iconic eyes, extending his hand and saying “how nice to hear that.” Then he asked about Marcella Whalen, the faculty advisor, who was instrumental in encouraging his literary aspirations.

Hearing that distinct and totally recognizable voice and being so close to him physically, felt almost magical, a sort of suspended animation.

However, the spell was quickly broken when the four people directly behind me, seeing I wasn’t buying a book, started grumbling. They raised their voices louder, peppered with some choice, caustic Amsterdam expressions, and unceremoniously shoved me out of the line and into the crowded square.

Born in New York City, Scott Neary’s international reputation as a visual artist was established during a ten-year residence in the Netherlands, beginning in the mid 1970’s. His arresting images of contemporary American scenes fascinated Dutch collectors and critics eager to understand the growing influence of the American experience on global culture. Neary’s multidisciplinary practice has carried out an intensive exploration of many mediums, including painting, works on paper, collage, ceramics, and filmmaking . He currently divides his time between his studio on Union Square and a home in southwest France.